Virginia as a whole was a large hotspot
for bootlegging and the prohibition in the nineteen twenties and thirties. Much
of that was located specifically in a county just south of Roanoke called
Franklin County. In this county bootlegging was huge, because many blue collar
workers and middle class wanted access to the alcohol that the upper class did
and many of the lower class saw this bootlegging, or creating and transporting,
as a form of income and survival. Franklin was such a center piece in the
prohibition era, because [i]“Nevertheless, in 1914 despite the fact that much of the
state was dry, ten major cities, including Richmond and Norfolk, still had
almost six hundred saloons.” This large number of saloons meant a need for
alcohol and Franklin County would end up becoming the place of production and
sale of alcohol. We can see this in a quote from the book Bicentennial
Reflectionswhen is says[ii]“One area where moonshining has never stopped in
Franklin County.” In franklin there were many notable moonshiners such as Jeff
Nowlin and even the [iii]Bondurant brothers and these men where the ones leading
the charge of bootlegging. The transportation and creation of moonshine became a
constant battle due to these groups of men. The battle was between the
bootleggers of Franklin County and the deputies put in charge. We can see this
constant battle when it says in Bicentennial
Reflections [iv]“Two months later, Captain Charles Gee, U.S. deputy
collector, led raids on Shooting and Rennet Bag creeks on 19 and 20 October. On
shooting Creek he and his men destroyed a 130- gallon still, allegedly belonging
to Asa McAlexander. In addition, Gee and U.S. Deputies Zackfield B. Wade and
W.T. Webb broke up twelve fermenters with 2,400 gallons of beer and 400 gallons
of slop.” The moonshiners and bootleggers of Franklin County would not give up
though and were always up for a fight against these deputies and this amendment.
It is said that [v]“by Bailey’s arrival, Franklin County’s reputation had
already gone national.” This county was roaring with a bootlegging lifestyle and
lead to many arrests but also much money being made by bootleggers. In the same
book Spirits of just men: mountaineers,
liquor bosses, and lawmen in the moonshine capital of the world it says
[vi]“While exaggerations abounded about the people and how
they lived, one amazing statistic was true: Millions of gallons of whiskey were
being produced and sold out of Franklin Count every year”. Overall this feat was
accomplished due to men such as McAlexander and Nowlin and especially the
[vii]Bondurant
Brothers.

[iii] "Digging Up Your Family." 'Digging Up
Your Family'. http://www.diggingupyourfamily.com/bondurant-family/ (accessed
February 18, 2014). 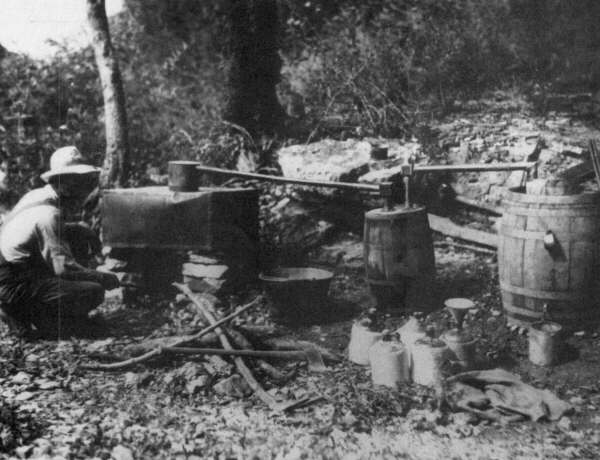